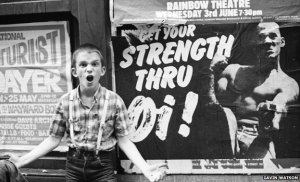 He was the British extreme right‘s most feared streetfighter. But almost right up to his death 20 years ago, Nicky Crane led a precarious dual existence – until it fell dramatically apart.

There were at least 100 of them. They had spent two days planning their attack. The date was 28 March 1980.

Soon they reached their target – a queue of mostly black filmgoers outside the Odeon cinema in Woolwich, south-east London.

Then the skinheads charged.

Most of them belonged to an extreme far-right group called the British Movement (BM).